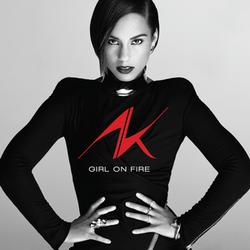 ebnjq3=0,h96,k0gv0,923450uThe fifth studio album released by Alicia Keys, released on November 22, 2012. It was her first release under RCA Records, and it won the Best R&B Album category at the 56th Grammys. The album title is a slight reference to Katniss Everdeen from The Hunger Games series, who Keys is a fan of. The title song, Girl on Fire, was also the lead single off the album.

Retrieved from "https://aliciakeys.fandom.com/wiki/Girl_on_Fire?oldid=4196"
Community content is available under CC-BY-SA unless otherwise noted.